Going back over the trip: 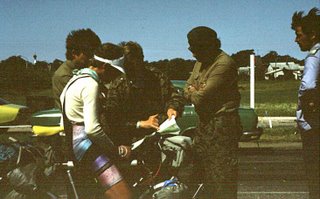 At the Polish/Lithuanian border we weren't allowed to cycle across it. The guy kept letting cars go and ignoring us and saying no so we just waited. Finally a Red Cross van came along and he told us to put our bikes in it and we went across with him. There were so many check points. The border must have been at least 500 m long! The line up at the other side to go to Poland was enormous, there were people camping even! On our side there was an American in a big camper who kept honking his horn and yelling at the border guards to let him through because he was an American.

He drove us to the Lithuanian side and there was a market where everyone sold "junk" on the hoods of their cars. There was lots of toilet paper there so we thought there wouldn't be a problem getting any (and then never saw any again!). 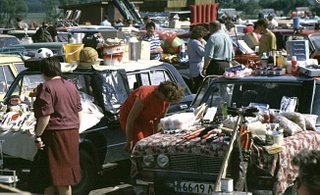 I loved Lithuania! But that was when the problems really started with Daniel. I had problems with my bike and the new tire and he wouldn't wait, "that's your problem". On the way into Kaunas I was sure I would be doing the rest of the trip myself. On Sunday morning my bicycle broke just outside of Kuanas and Daniel said he wouldn't wait . While I was waiting outside while he checked us into a hotel (which cost us less than $2) I spoke with a man who ended up finding us someone who would fix my bike tomorrow (a Sunday!) - incredibly lucky. So Daniel agreed to wait.

Kuanas turned out to be really nice. The people were all great there too and it was dirt cheap! It cost nothing to live there! We had dinner out and each had two main courses, extra everything and two deserts and it was about $1. So it turned out to be a nice place to stop.

The next day we started out and after 60 km (which took 5 hours because of very strong headwinds!) I realized I had left my passport and money in the hotel!! Oh god! I had put it under my pillow for safe keeping. I thought that was the end and I had a terrible feeling. Daniel would never go back or wait for me and I would have to do the rest of the trip by myself. Well, I could always get on a bus as I was too scared to do it on my own.

I finally took a deep breath and told Daniel. He didn't freak at me even. I was surprised. He said we must phone there and at the next crossroad there was a collective farm and they phoned for me (I drew pictures of what had happened) and they said that the hotel had it!

One of the men drove Daniel and I back to Kuanas and then when we got back they invited us for dinner. They really had laid out a feast for us! It was amazing! The strawberries and strawberry juice were delicious! So again we were lucky and I was surprised that Daniel waited.

Then we continued cycling and the next four hours got us 40 km. I peddled so hard! Especially when I was the lead rider, I worked harder than I ever have! I gave everything but the wind was so strong and really slowed us down. I was exhausted when Daniel decided it was time to stop.

We ate supper and rested for a bit and then at sunset (11pm) the wind died down and we got back on our bikes and rode until 9 am the next morning when we reached Klaipeda. We did about 120 km.

For a while (about 2am) I had to concentrate very hard not to fall asleep. At 4am Daniel wanted to stop and I said we should keep going to the coast. If we stopped I knew that I wouldn't be able to go until later on in the morning.

So we slept on the beach in Klaipéda. We took a ferry across to the sandbar and stayed there from 9:30 till noon. There was an awful mechanical voice coming out of the speakers that were all down the beach. Klaipéda wasn't very pretty but the sandbar was neat. 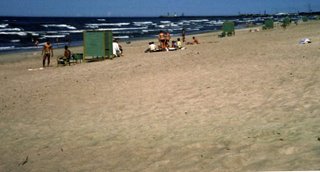 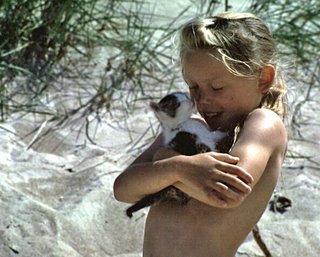 I went to the grocery store and that was quite the experience. I stood outside in a line to get in and then it was a mad rush around the store to get everything and then line ups to buy each separate item. It was crazy. We had experienced these line ups in Kuanas but it was Daniel who bought the food then. In one place I waited an hour for him to get bread and cheese.

We then continued on. I thought we would be able to spend the day at the beach but Daniel wanted to keep going. I thought we did another 60 km but the map only showed 40 km so it was slow going. When I finally got off the bike at the border I could barely walk! We asked the guards how far to the sea and a place we could go and camp and they said there was a turnoff in 400m. Unfortuantely then we had to walk down a small trail for a long time, I don't know how I managed to walk at all.