The Lithuanian/Latvian border was no problem for us to cross. They were very friendly, and very young, looked like teenagers. Again we went through numerous checkpoints but no problem.

So we take the turn of and end up walking our bikes for one hour (5km)!! I was so exhausted. I dare not say anything as I think Daniel decided to go to the beach for me as I had been disappointed that we hadn't stayed on the beach earlier today. The road was far too rough to ride on. Then we came to a gate. Great. The border again. Daniel asked where we would be permitted to camp and the guard let us camp right on the beach where the border was.

I sat in the freezing cold ocean for a few minutes - I would have liked to sit there longer as it felt so good on my quads and knees - but I was scared that Daniel would get mad if the camp wasn't set up right away. It was so painful to walk.

The next morning I was surprised that I could move! And I was in luck as Daniel said his legs felt really heavy. Otherwise we would have done 200 km that day as he had planned the night before and I was dreading it. We ended up doing about 120 km.

I mentioned about getting a new wheel in Kuanas after the other replacement ended up giving out. That day Daniel had thought I was slacking off and when I had to stop he got mad at me for being so selfish - not thinking about him and wanting to take a break by making excuses about my bike. I couldn't believe it as I felt I had being working hard. Only once did I ask him to go slower and he replied that I had better keep up or I would be on my own. At this point I had clued in that I was really just coming on his trip and had to follow his rules and had been mistaken about it being our trip.

Then, on our last day yesterday we were going so fast and I needed a rest and I asked and he just stated that it wasn't time yet. At that point we had gone 100 km in 3.5 hrs. I pushed myself very hard the entire trip with my motivation being that I would be left behind if I didn't.

Anyways, the racing wheel broke just past Saldus. When I stopped Daniel just kept going. Oh well, I was surprised we were still together anyways. A man stopped and brought me about 40 and then I got a ride in a big truck into Riga. I wasn't planning on saying anything to Daniel when we past him, but he had turned around. So the driver stopped and we made arrangements to meet in Riga by the big clock.

Once in Riga I went to the big hotel, similar style to the one that had only cost $2 but it was $200 per night! I used the washroom and got oriented there. Everyone was really nice and one lady said that we would be welcome to stay with her for the night! Great!! 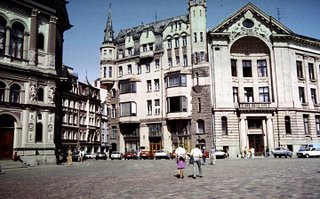 Then to find a bike shop. I asked some students and one ended up taking me around to find one. I ended up getting another new rim. It wasn't great but I only needed 300 km more out of it.

Daniel and I met up no problem. I was actually surprised to see him as I really didn't think he would come. I think it made things easier from now on that I had the confidence to go on my own and wasn't so worried about being left behind any more. 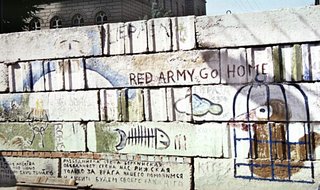 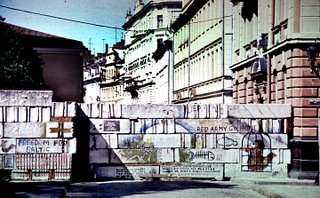 All I had found to eat was bread and cheese so we ate that and then ate lots of ice cream. This woman that invited us into her home was an Aussie and spoke English!! They went out to a party and didn't come back. Neither Daniel nor I got much sleep though as there were so many mosquitoes! It was awful.

We looked around town the next day and met up with a man who showed us around a bit and then offered us sandwiches as well. Then we cycled around to look for bread, after leaving one place because the line up was so long and we hadn't moved in an hour. We never found any as everywhere else was sold out.

We had eaten in a restaurant for lunch but it had been expensive and no good. It cost $4! (After eating double the amount and better food for $2 it was expensive!) So we left town and cycled about 20 km to set up camp.

The next day we did 180 km. We stopped in Salacgríva and bought supplies. We had to use up the rest of the money we had exchanged. We bought eggs, cheese, two sweet breads, lots of cookies and cakes, and six loaves of bread, and it didn't even come to $1!

So we crossed another border, they were again young and friendly and there was many stops. We went to Párnu and stopped at the beach there. The water was great!! Really warm and the beach was so beautiful. That is a great place! Unfortunately we couldn't camp there and continued on.

Then yesterday we did the final 120 km and ended up in Tallinn!