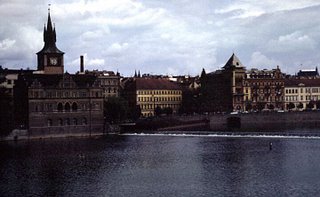 It has been a good week. I've enjoyed living in the flat and Maria is very nice to me. She is very happy to have someone here as she is not able to look after it herself. I cleaned her apartment when she was gone, not everything as that would take years! It is so dirty. She is very grateful. I am as well as it looks like I may not get paid for working either so I really need the good rent!

Csaba (another UBC exchange student from Hungary) came to Prague to see a friend who is studying here. We had a very fun weekend together. His friend has been studying here for 3 years and does not have one Czech friend. It seems like everybody has certain ethnic groups they don't like, there are communists, Slovaks, Czechs, Hungarians, blacks, skinheads and Gypsies. It seems like they all agree to dislike the Germans though and they said I look very German so it may be part of my problem here. I read an article in the paper that was "pro-skinhead" and said nice things about what they had been doing. I was told that the reason the Czech people like them is that they chase out the Gypsies. 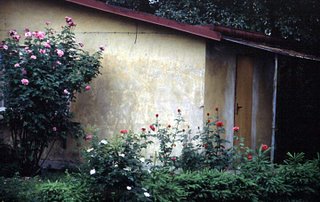 We went to a Jewish memorial on a site where there was a children's' camp. It was very devastating. I had to leave. I can't even write about it now. 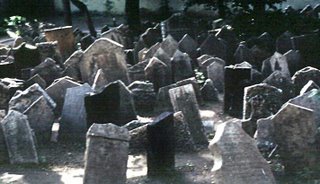 And here is a memorial set up for Jan who lit himself on fire here in protest of the communist invasion.

I have also met a tall and very good looking Frenchman who is going to cycle around Eastern Europe and has asked me to join him. I told him I only have $300 left but he said that is plenty. I showed him my bike and he think it is good enough. What an opportunity! Nothing has worked out here, except meeting Maria and living in her flat. Well, I could always go for one month and then come back and teach in a camp for the summer. The other program is supposed to be better anyways.

Daniel is being sponsored to do his cycle trip. He is planning on going north to Estonia and then heading east through Russia all the way to Mongolia and even Vladivostok!