and off to Germany!

I had taken my bicycle to Europe as almost an afterthought. At the last minute I thought it would be a good way to get around in Prague while I worked there for the summer teaching English. (I had no clue about cobblestone roads either!) So I found a bike box and my bike came with me.

I left Vancouver at 8am and arrived in Frankfurt at 9am the following morning. I had met some MBA exchange students while studying at UBC and one of them, Michael, let me stay at his place in Siegen for the first night. I spent a day there and got my bicycle ready for the trip.

And that is how it all began...

I cycled about 100km from Bonn to Aachem.

I am in Duren eating an excellent lunch of buns and cheese, a kiwi, strudel and orange juice. I'm sitting under a cherry tree which is blossoming and has left a blanket of pink on the ground. And the church bells are ringing.

So far the cycling is easy. Not many hills, although the wind is in my face and slowing me down. Lots of farmland and very peaceful except for these jets flying overhead right now.

I'm going to have to ask directions from here - I hate asking because people I am often misdirected. The last shortcut I took I ended up very lost and had to come back the same way. I want to learn to speak German very badly!

Here are some pictures along my round-about route: 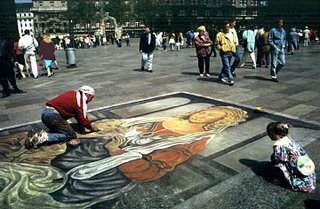 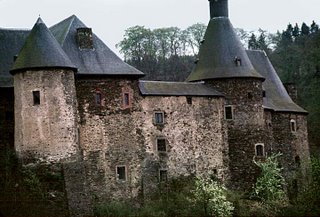 (Boy did I love this city!)

I stayed here with Eva, a friend of a friend. She lived with another woman with a child and a man. At that time I thought that was a very "forward" way of living. They all spoke English so that was nice as well. I am also surprised at the lack of such things as microwaves and answering machines. I am also blown away by the talk of politics and world events again and I just listen to all the neat ideas.

The view from the cathedral:

(I had climbed all the way up only to find you need to pay 1 DM at the top so I walked home and got it and went all the way back up again.)

We did a small cycle tour to the west and it was very nice. They have great areas set up for cycling! I decided that I would like to do some more cycling and thought the Black Forest would be a nice place to head to.

It was here that I also noted that I was running out of money. However, I thought that since I would be working in Prague I wouldn't have to worry too much.

So I tuned up my bicycle and headed east on May 12th.