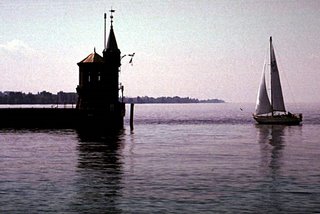 I had the best picnic today ever! My plan was to cycle around the lake but after a short time I was so negative I decided, why not stop? So I bought strawberries, yoghurt, really nice bread, 3 kinds of cheeses, sausages, ice cream and gummy bears (which I eat while I cycle). I climbed to the top of this hill where I was all alone - and in an orchard! The trees were still blossoming and the view was incredible.

I decided not to go on at all and just relax and enjoy myself. I took off my top and laid in the sun. I even fell asleep (under a tree as it was very hot, about 34C). It was great. 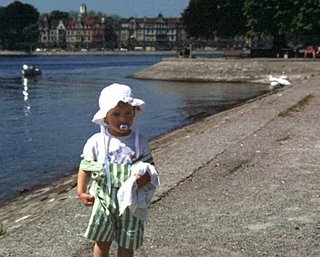 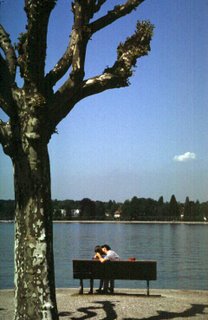 I stayed at a youth hostel with a water tower and an incredible view for 2 nights just outside of Konstanz. It had a curfew and some of us had gone out for beer and had to cycle like crazy to make it back in time.

And then from here it was to take the train from here to Siegen and into what was then Czechoslovakia. Nobody spoke English at the station and I had pre-purchased a ticket for my bike but they still wouldn't let me take it on the train with me. The man kept yelling louder and louder as if he thought if he hit enough decibels I would suddenly be able to understand what he was saying. He took me to the baggage people and stormed off.

Then they were telling me that I would have to take off all the panniers and that I needed an additional ticket for each bag. I was also told that they would not be traveling with me. So the bags went directly to Prague and I got on the train. I ended up in Siegen again and met up with another friend from UBC, Ekki and his sister also and then I was on the train again to Prague!